The early Methodist Societies were precisely that. Groups of people within the Church of England who, inspired by the preaching and teaching of John Wesley, wished to grow closer to God. They had responded to John Wesley’s call to repentance and salvation by faith. It was never his intention to start a new church but instead renew the Anglican Church from within.

He realised early on that the new converts could not be expected to grow if left to their own devices and started to organise his followers into societies based on geography such as here in Walsingham. Societies were subdivided into classes of upto 12 people.  Class leaders were expected see each person in their class, once a week at least, in order “To inquire how their souls prosper; To advise, reprove, comfort, or exhort, as occasion may require ; To receive what they are willing to give, towards the support of the Gospel” Often at class meetings members were expected to openly confess their sins over the past week, give testimonies explaining how God had been active in their lives, give a penny if able to the cause and pray together. If they failed to meet regularly members could be expelled.

In order to gain entry to meetings of the class or society members were asked to show a class ticket. Although still given out today these had a real role in the early days when Methodists were considered rabble rousers and rebels and people were infiltrated to disrupt their meetings. It showed that the person attending was sincere and not out to cause trouble. This did not of course apply to evangelistic preaching ! 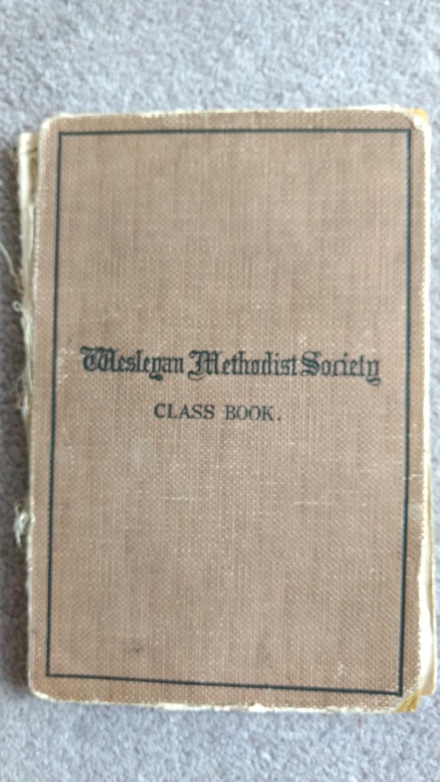 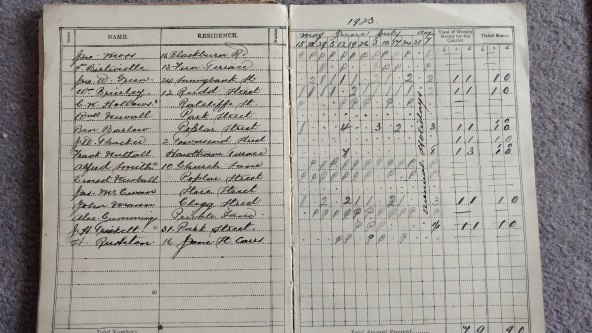 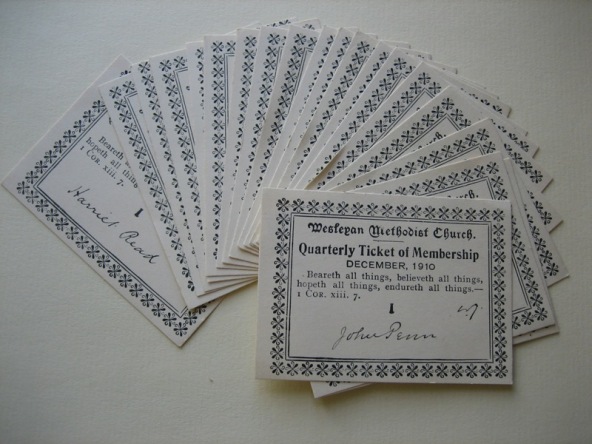 Methodist Societies needed somewhere to meet and when they outgrew people’s homes meeting places or chapels started to be built. Some were small and simple, 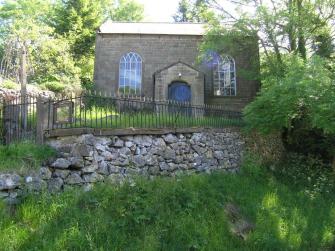 some larger but to a simple pattern such as here at Walsingham. 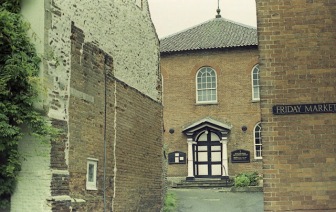 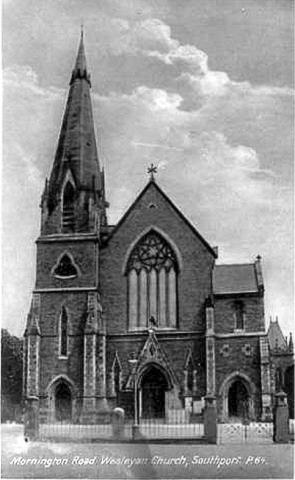 Often chapels were built with sacrificial giving from the congregations, sometimes wealthy supporters or members contributed large sums and on other occasions loans were taken out which could take many years to pay off. To help raise money some chapels used a system of pew rents. Little slots in the end of the pews were to accept a card with the name of whose pew it was. If you look on the ends of the pews in our chapel you will see typical examples as shown below.

Always a certain number were left as ‘free’ pews where anyone could sit. In some chapels a board as shown below denoted those pews available for rent or taken. This system fell out of use many years ago ! 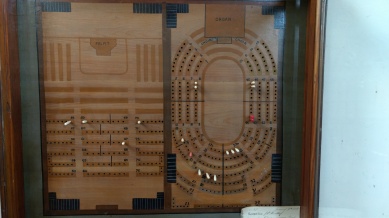 Travelling Preachers, initially termed assistants (to John Wesley) and later Ministers, were appointed to a locality in which a number of Societies were established. Initially the Travelling Preacher would visit each society in turn – hence the term ‘Circuit’ as they travelled around from place to place. Preachers, later called ministers, stayed in a given circuit for two years (later extended to three) and although the duration of an appointment has increased to 5 years or more the idea of ministers changing appointments is still with us today. As there were always more societies, and later chapels, than ministers the remaining services were and are taken by suitably called, trained and accredited lay men and women. These Local Preachers can bring something of their practical experience of life and work to their preaching, Bible teaching and worship leading. Initially if society members felt that God was calling them to this role they would be given a “note” to preach from the travelling preacher and help lead services and if satisfactory would be then put “on trial” for a further 6-18 months. In many rural areas there were not enough fully trained preachers and so other men and women were allowed to lead services known as “Exhorters”.

This is one of the major differences between the Anglican and Roman Catholic Churches with their vicars or priests attached for an indefinite period to their parish church and responsible for conducting all services there, and the Methodist arrangement. This basic structure remains to this day.

During Wesley’s lifetime he kept a tight control on the organisation; however following his death several breakaway groups started. The first was the Methodist New Connexion of 1797 which though similar to Wesleyan Methodism believed that members should have a greater say in the running and decision making of the church. The more important split was that of the Primitive Methodists which was caused by enthusiastic members not wishing to toe the more conservative ‘party line’. Dissent was caused by the decision of the hierarchy to forbid ‘camp meetings’ in which large numbers of followers assembled in an isolated spot for a day and a night revival meeting. In political terms this decision might make some sense given the suspicion in which the Methodists were beginning to be regarded by the authorities, and the possibility that these meetings might be seen as seditious. The proponents of these camps, Bourne and Clowes, thus separated from Wesleyan Methodism in 1810 and created the Primitive Methodist Church which over the next 60-80 years grew rapidly especially in areas like Norfolk. Primitive sounds an odd name to our ears but really meant going back to the roots where Methodism started in outdoor evangelistic preaching rather than becoming part of the establishment. Look around and see how many chapels and converted chapels have Primitive Methodist over the doorway. Even small villages often had two chapels and Walsingham was no exception. Later in 1932 the various strands of Methodism combined which led to the Methodist Church of today. 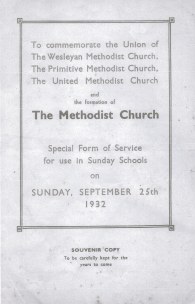 Because of the large number of chapels and the need to provide preachers for all the services a plan of who was preaching where and when was developed. This has always remained a characteristic feature of all branches of Methodism. The “Plan” is in essence no more than a diary of appointments for the of preachers working within a certain circuit – in practice they could be considerably more complex than this and cover more than just the Sunday services.

Quite when the first plan, as such, was drawn up is not known for certain; Wesley himself had drawn up a weekly preaching plan for the London preaching places and preachers in 1754. The first mention of a plan is in a letter by John Wesley dated 16 February 1780 requesting that Christopher Hopper, one of his assistants at Colne furnish him with a copy of the ‘plan’ and implying that Hopper had been the originator of such plans within the Colne Society.

These plans, originally designed to help the Preachers, were at some time started to be printed and made available for members to buy.

They are fascinating in their own right as historical documents but unfortunately at the time were treated as we might consider a magazine or newspaper and thrown out when the new plan arrived. Because of this only random plans survive. Nevertheless they give us a snapshot of life at that time.

Look at the numbers of chapels; How many survive today? Where are they? How many are now holiday homes?

Consider what an effect Methodism had on the local people; How the chapel was the centre of their whole life and how dedicated to it they were.

Consider why each village had its own chapel in the days before cars and buses.

Look at how many services were planned each week at even the smallest chapels.

Look at the distances the preachers had to travel before the days of cars and bicycles; you can see that often a preacher would be planned for 2 services at the same chapel on a Sunday as a result. Imagine walking miles home after a Sunday evening service and going to work early the next morning.

Looking at a typical plan the basic layout hasn’t changed a great deal. It shows

At the head of the list are the travelling preachers, later ministers – On Wesleyan plans these are often indicated by Surname alone whereas Local Preachers are given by Initial and Surname. The Primitive Methodists were somewhat more democratic in not distinguishing them by style, though travelling preachers still headed the list.

Local Preachers were ranked in order of seniority (i.e. how long they have been L.P.s) on the plan although today the list is sometimes alphabetical – they could lose some of this seniority, to ‘be sunk’, by missing appointments or other misdemeanors, more serious breaches of course meant that they were expelled. On older plans the preachers were given a number which was shown against the chapel service rather than a name. Dropping down the numerical rankings by losing seniority was something to be avoided at all costs! Many preachers would spend over 50 years on the plan and indeed our circuit today has one active preacher who started in 1957! ‘Exhorters’ also appear on some plans as a separate list. Most plans, covering the main Sunday services, are for a three month quarter year.

Below the list of Preachers would be various notices for that quarter giving dates of various meetings, special collections, together with a list of exhortations not to miss, or be late for, appointments etc. Sometimes poetry, hymns etc could be found on plans together with other circuit information .

Join us for a time of informal worship followed by food and a drink together. Monthly at 4-30pm as advertised